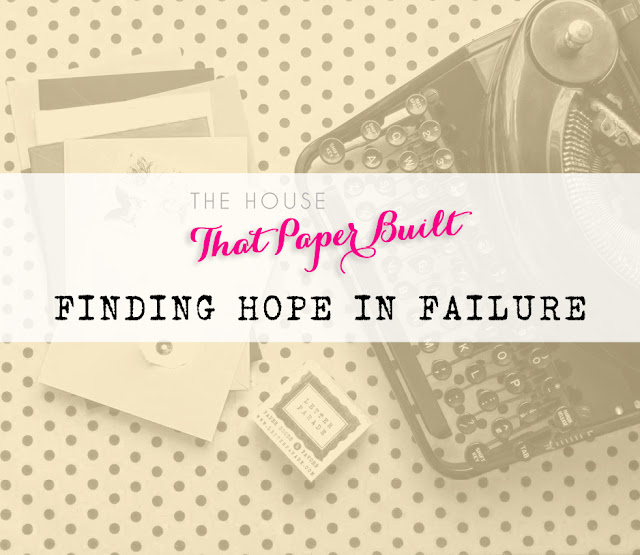 This is a hard one to write because vulnerability wasn't something I occasionally take around the block for a casual walk. I've thought about returning to where I last closed the curtain, peel it back and act as if nothing happened. But there's been far too much time in between, and I needed to be honest with myself, first and foremost.

Failure is the F word that now appears more taboo than the other F word. I set out to follow a path that made me feel alive - I felt good every step of the way. I met kindred spirits that made the journey oh, so heart-warming and I've made some good strides. I have started Letter Parade with little expectations of where it was going to take me. It wasn't clear where I should've stirred the wheel but the one thing I made sure was that I put out the very best of what I've got to give. That every product I churned out was a big resounding "yes!" and I stashed away the ones with even the slightest "meh." I think where I lost my footing was thinking I had enough credibility to go for gold and not realizing that before I get to that pedestal, I needed to be at the level of bronze then silver. I was naive to think that I was exceptional enough to have a shortcut. I let the magazine features go to my head.

No matter how much pep talk I gave myself that I welcomed failure because they made me more sure of the next steps I had to take and that I needed to make all the wrong moves because I anticipated these were my best teachers - nothing could've prepared me for the version of myself that I met when my first wholesale trade show wrapped up. I felt defeated and my arm only had enough strength to wave the white flag. I could see myself in the eyes of my dearest friend, Lisa Sarmento of Tiramisu Paperie and I didn't like how I've let myself succumbed to failure made only worse by how I wholly embraced it. And God only knows what I'd done if Lisa wasn't there with me every step of the way. I simply cannot thank her enough for keeping me standing and to finish with grace. Her resilience, humor and impeccably good heart saved me many times over.  Thanks, Lisa! I love you to the moon and back!

It has been eight months since that curtain call. While I've kept my days busy with my day job, at night I was inconsolable as my husband would tell you. I hadn't designed any more products, I hadn't posted anything on social media on behalf of Letter Parade. One could say I've simply left the playing field but I sure wasn't at peace. Failure was a stranger I didn't know how to entertain and whose acquaintance I should've made the most of. But no, instead I was nurturing towards it and it brought me the self-doubt I thought I'd fought hard to eradicate. I let failure convince me all the things that I now found easiest to agree to - yes, I'm not good enough; yes, I don't have what it takes; yes, I am better off doing the barest minimum with the littlest of risks... the all too familiar voice. I've let it drag me on for this long before I realized that there is no fault in getting back up, moving on and admitting to the world that I let failure get the best of me. I've also learned that the very definition of resilience is becoming unstoppable to what it is that you truly love to do and that to me is clear - designing.

So yes, I'm going to give this my second, third, fourth, fifth and all the infinite shots I could for as long as I can see ideas in my head that I need to put on paper. Yes, I will now focus all my energy to turning failure into the teacher that I expected it to be. And yes, Letter Parade is back and oh, my I've missed it so. 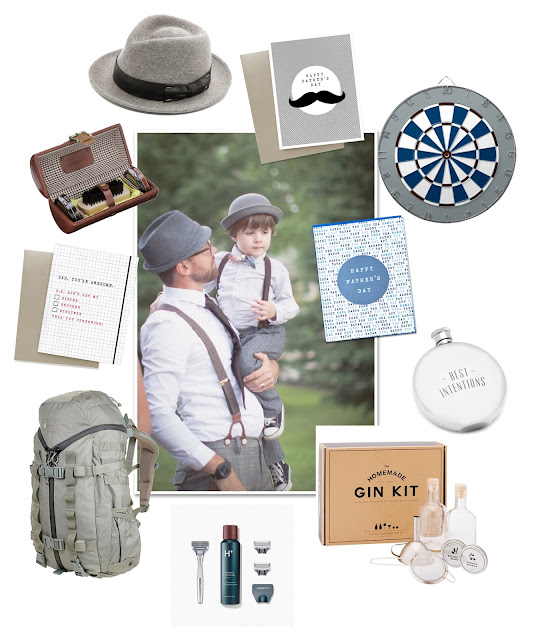 This one's for dad.

Although my father passed away three years ago, he left with me a wealth of fond memories to remember him by. He was the true artist. He had impeccable taste in almost everything, most especially when it comes to music. As a daddy's girl, I definitely take from him.

No, he wasn't a dapper dad. I think being a father in Asia in the late 70's and early 80's kids would be anything but dapper. So the items included in this mood board for gift ideas is a good assortment for different types of dads. One who's adventurous and into traveling and backpacking, another who's a drink connoisseur, one who is practical and invests in high quality essentials that lasts a lifetime, and another who likes to kick back with a game of darts. 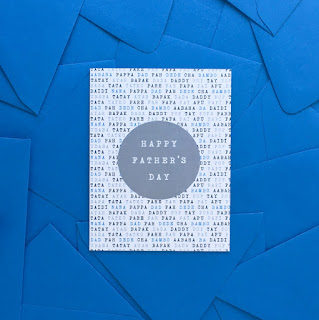 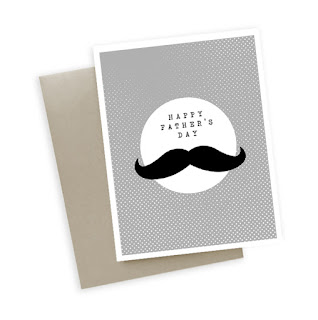 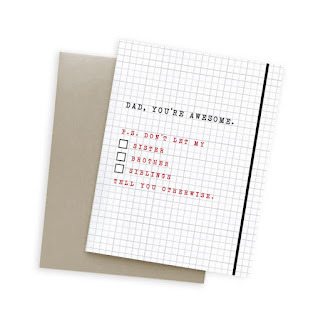 What other gift ideas for dad do you recommend?
Love & Letters, 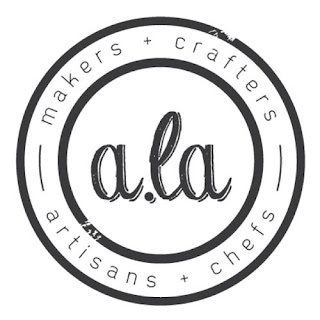 I am so thrilled to announce that my application to show with Artisanal LA at the Las Vegas Market come Summer has been approved!

This will be my first ever wholesale trade show so I'm a ball of emotions at the moment. But I will be joining fellow stationer pals and vets in the industry so I rest easy I will not be completely alone in this exciting adventure!

Save the dates on July 30th thru August 2nd! More details soon to follow!

My Favorite Things: Round-up for Mom 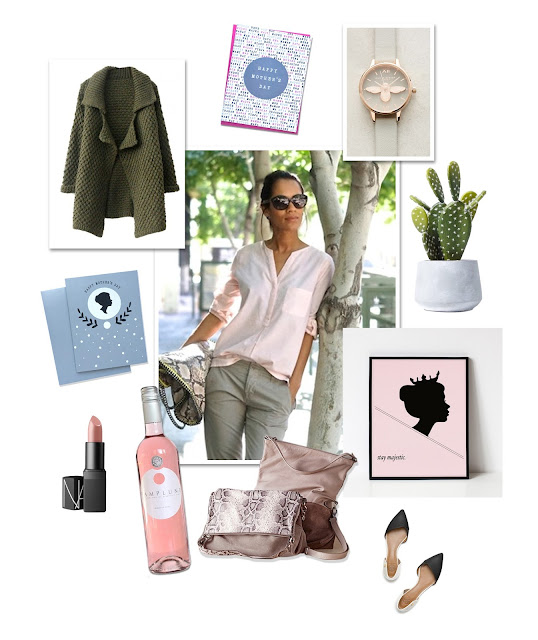 I've put together this mood board with mothers in mind, filling it with carefully selected pieces of gifts that I'd love to gift my mother. Works for mother's day (that's fast approaching), holidays, her birthday or just to simply say 'I love you'.

Each item will give you an idea of how my mother is: lowbrow yet tasteful and ever so practical. My Mah turns casual into trendy but always goes for the comfortable as well as timeless. So if splurging a little means you'll get your money's worth in the end, well then, it's a no-brainer.

We don't come from money. We're middle class as middle class go. My Mah taught me expensive brands don't mean anything if you don't know how to wear it in a way that flatters you. So we find the good with the cheap, and trust me, we always do! The one best lesson when shopping that she imparted to me that is somewhat of a double-edged sword is: "Buy it now or spend time thinking about it later only to find it's already gone when you go back for it. Anyway, you can always return it if you change your mind. This way, there are less regrets in life."

Then off we go to the clearance section.

Now, I feel like I really have to explain the addition of the cactus planter on here, well, maybe most moms prefer a bouquet of flowers. Feel free to switch it up. I just know that my Mah, being the green thumb that she is - prefers to have something that lasts longer with as little fuss as possible. So there you have it.

The Letter Parade products featured above are: 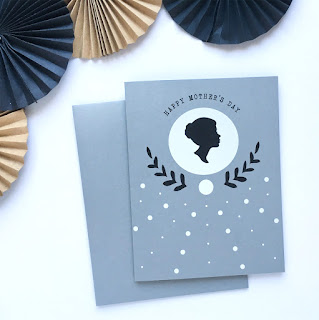 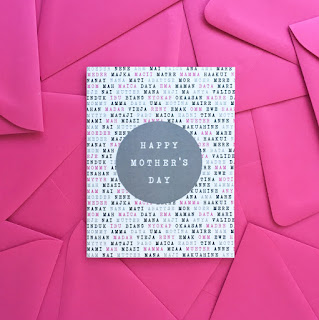 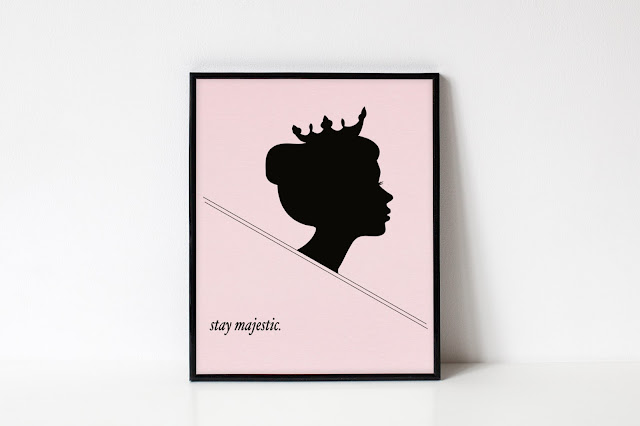 What other gift ideas for mom do you recommend? 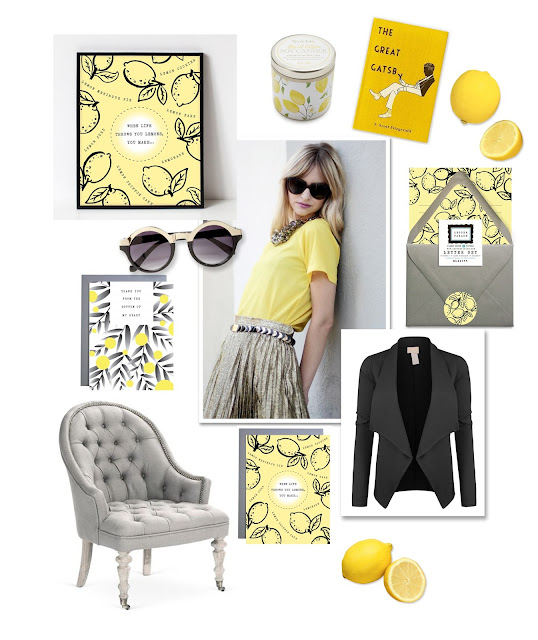 Who doesn't love yellow? If there could be a more endearing shade in the color palette it's only another version of yellow. The happy color; the sight of yellow generally invokes pleasant feelings.

My idea of spring is yellow with gray - just a subtle touch of elegance like this outfit by Late Afternoon blog. A simple casual yellow shirt dressed up by metallic tones ready for warmer nights out.

If it isn't obvious until now, I'm crazy about the color gray. It's such a beautiful neutral shade that goes with just about every color of the rainbow. So when I designed a more Spring-inspired line, adding yellow to the mix was a natural choice. 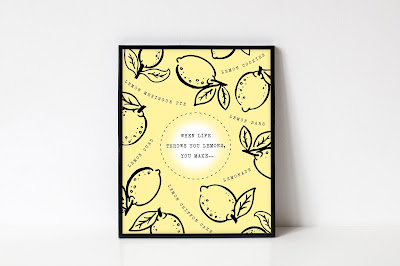 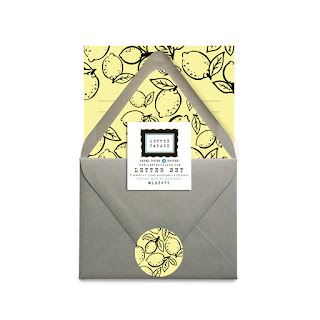 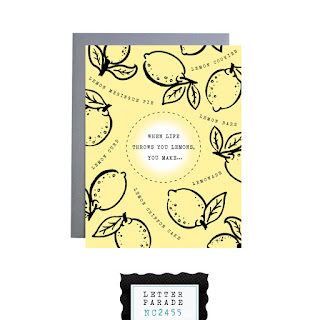 When Life Throws You Lemons Note Card. Get this here. 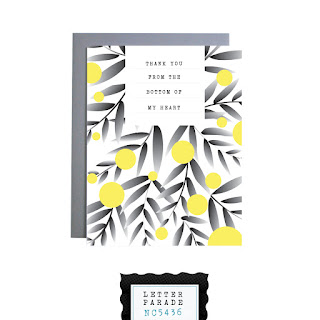 Lemon Drops Note Card available single or boxed set of 8. Get this here.


The Lemon Drops design also inspired the March desktop printable calendar and printable stationery (below)  that I share exclusively to newsletter subscribers. Sign-up now to get new designs every month delivered straight to your inbox! 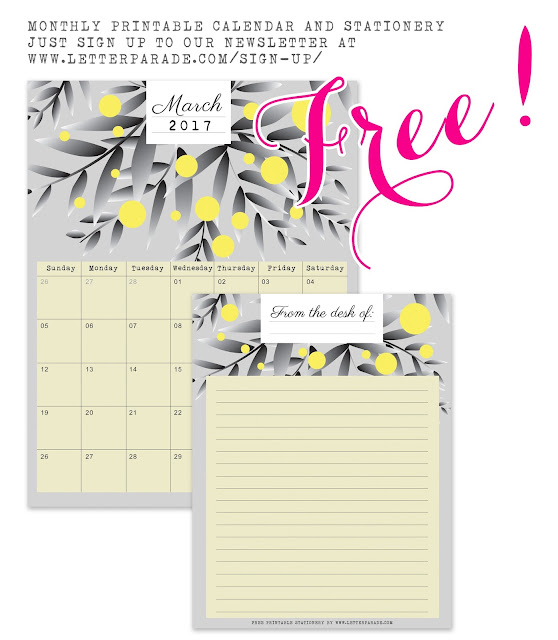 After putting together this mood board, a story has revealed itself to me: a woman getting ready to go out for cocktails and dinner decided to kick off her strappy shoes, picks up The Great Gatsby, lights up the candle and proceeds to get comfortable in the light gray tufted chair to read all night long. Yes, I believe those are my kind of nights these days but with a more casual attire, like say, sweatpants and t-shirt. Ha! 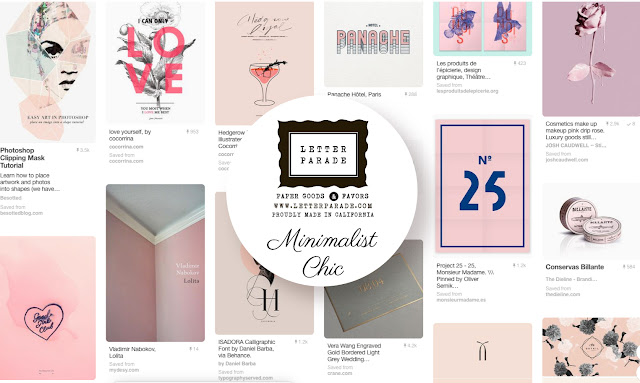 You can expect to find plenty of wide open spaces surrounding my designs. I go very minimal with color and my palette typically revolves around pink, grey, black, blue and red with the occasional burst of yellow.

I'm not very good with snark so you won't find that here. Nor am I good with calligraphy, so my font is limited to that of a typewriter style to give my products that classic feel with a modern touch. My goal is to produce very clean and timeless products and I sure hope these are what you're looking for! 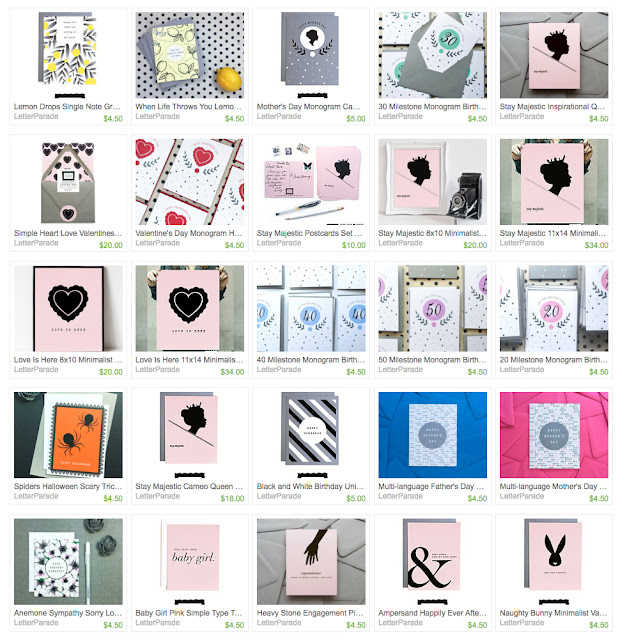 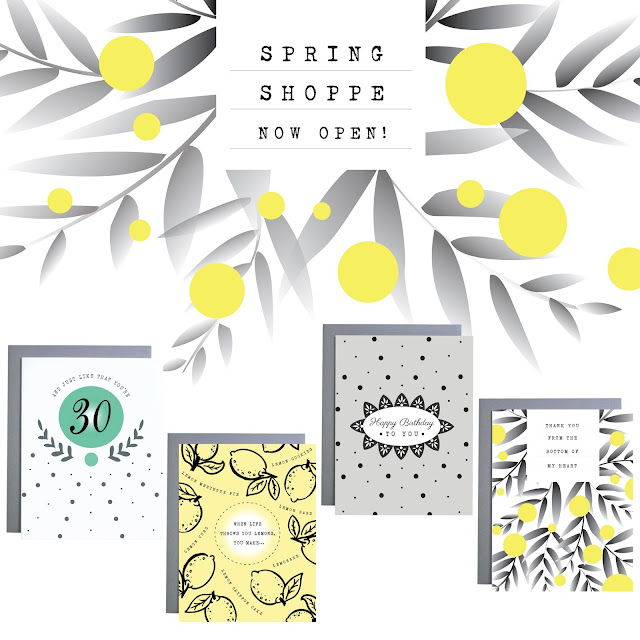 After a much needed time with my family back in Chicago, I am back with my sleeves rolled up and ready for business with the opening of my Spring Shoppe.

I've transitioned the colors from pink and grays to yellow and grays - gotta have my grays!

In the next few weeks, I'll be crunching time and money to get my first wholesale catalog wrapped up and out into the world by mid April! I'm excited, nervous and kinda worried since competition is tough out there. I hope you stay with me on this upward journey!

Hello, nice to meet you! 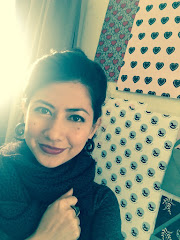 Letter Parade is the brainchild of Cindy Kujat, a print designer based in Los Angeles with her husband Dan. This blog is where Cindy shares the A-Z in running a stationery brand, living in LA, being a foodie, a bookworm, a Filipina, and what it means to be head-to-toe devoted to paper & design. 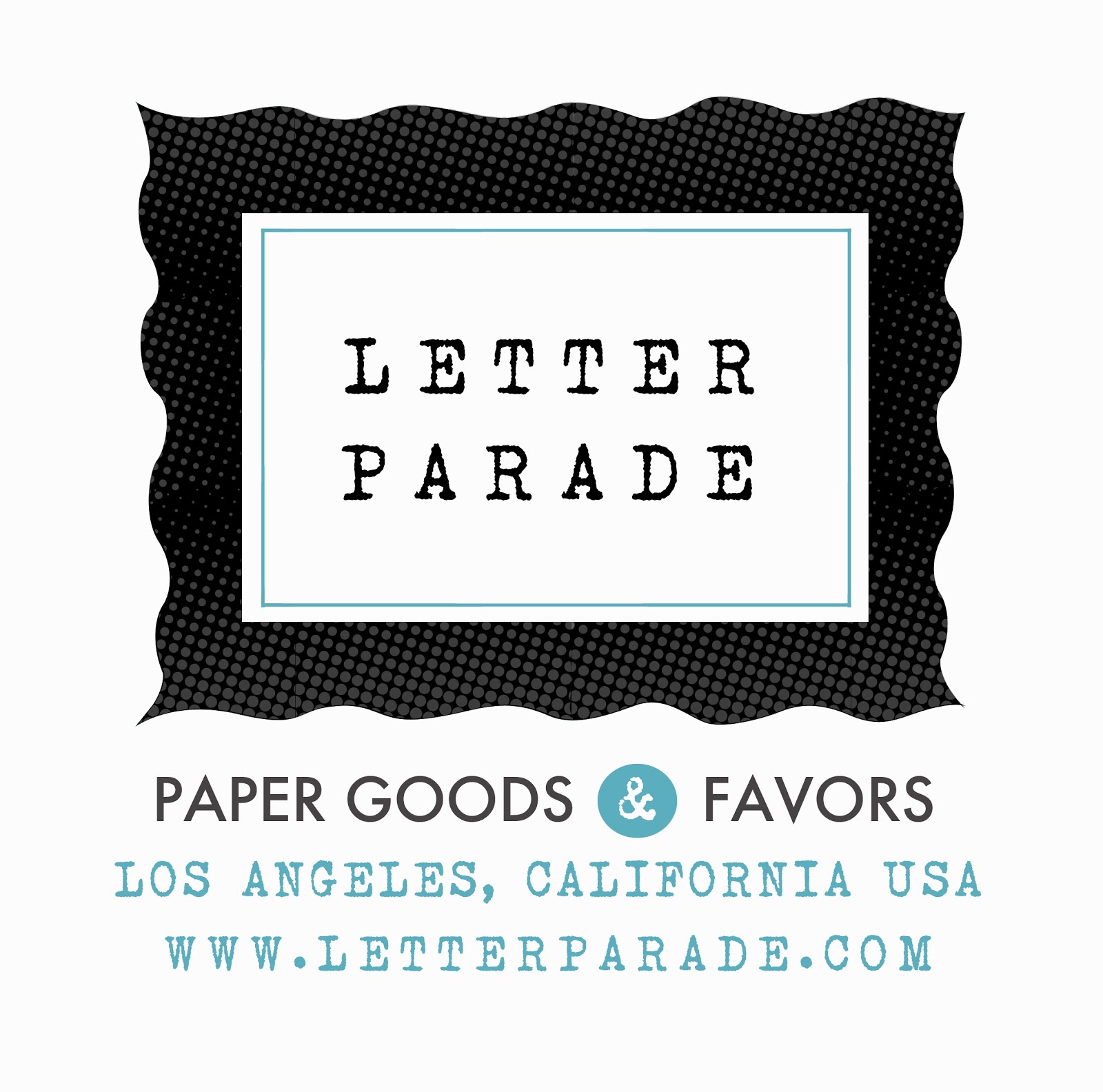 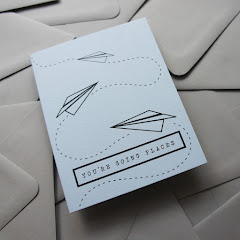 We only send this once a month

We made it to the cover of 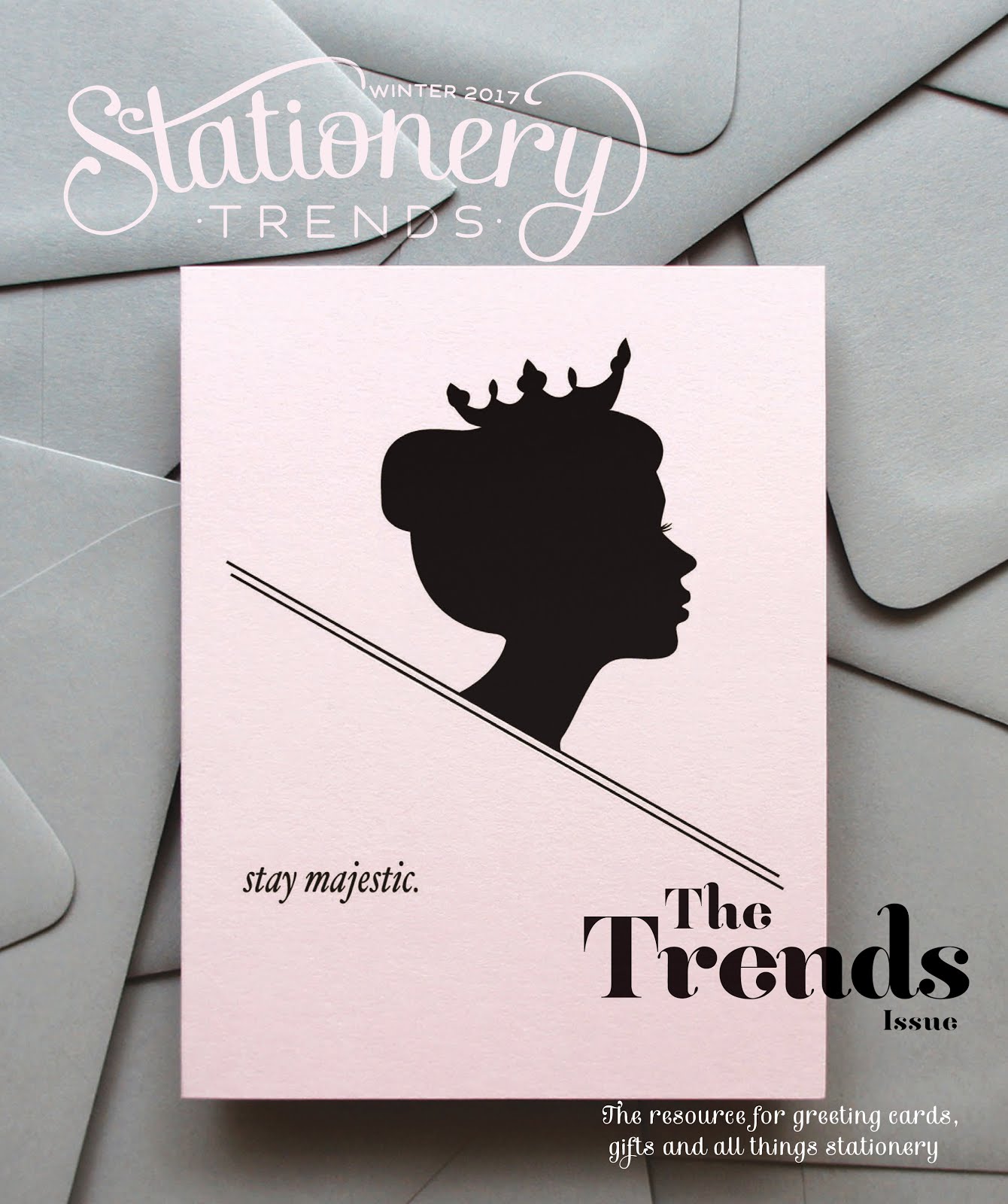 Read about us here